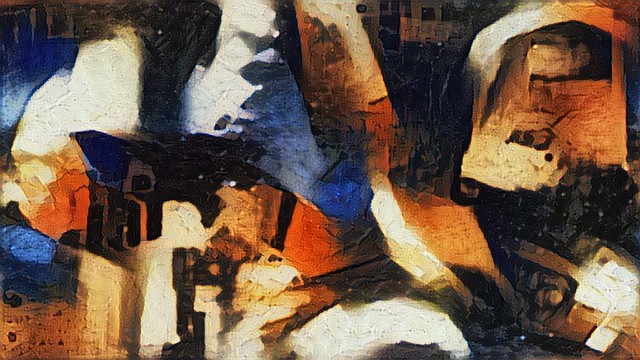 The neural collage ‘When Schwitters met Trump’ responds to the angst of our time just as its historical and political references play with each other across ideological and temporal eternities of striated histories. An image of current American President Donald Trump signing one of a number of mysterious but publicly ostentatious executive orders was sampled from the information stream of the world wide web and computationally blended with the compositional sensibility of Kurt Schwitters’ revolutionary Das Und-bild using neural network ‘style-transfer’ as a starting point, proposing that in the mash-up of artificial and questionable intelligence ‘everything has broken down and new things have to be made out of the fragments’ (Kurt Schwitters). ‘When Schwitters met Trump’ reflects my concern with mediated partisanship arising out of the juxtaposition of subjective truths and fake news; a world of liminal existence, uncertainty, and irresolution, which is nonetheless encoded and controlled.

As an abstract painter studying the cognitive science and psychology of creative process, I find the fragmentation and emergent forms offered by a global culture of disenfranchisement to be a rich field of unexplored imperatives. Whereas Schwitters tried to make sense of a shattered world by layering and composing it’s refuse, today the fragments are pre-made by the machine, emerging unrecognized at birth, the products of an internalized algorithmic shattering spewed out with mathematical precision, modulating our organic slumber with ubiquitous consumption, bringing a metamorphosis that we do not even recognize until it embodies us – man remade in the image of machine. In this work I call for the artistic disruption of the irrevocability of the machine through the humanist intervention of emergent neural Merz.