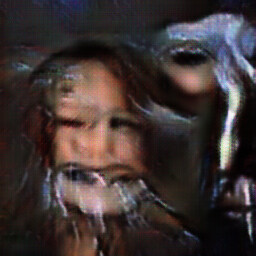 This featured image, named as “night clouds” produced by using finely tailored versions of DCGAN and CycleGAN architectures. Source images are based on traditional Turkish Art, named “Ebru” which carries a meaning of being “cloudy”. In addition to Ebru Art we mixed  Celebrity-A dataset recreated by DCGAN. In Celebrity-A data-set the inputs areportraits of famous people, most of the outputs in EbruGAN depicts mixture of people in the form of cloudy shapes. This is why this work is named as “night clouds”. We trained EbruGAN for 100 epochs for each time. As a result, we formed a mixture of  “Battal Ebru” and “\.{İ}stiridye Ebru” for the first training episode. For the second training, we mixed “Tarakli Ebru” and “Gel-Git Ebru” together and applied on “\.{İ}spanyol Ebru”.
In addition to EbruGAN, we used DCGAN to generate to mixed style Ebrus  and human silhouettes. Hence we achieved a mixed-style output of Ebru Dataset to distort human silhouettes. DCGAN was trained for 100 epochs, with Adam optimizer and the learning rate of 0.0002.
Optimized version of CycleGAN namely “EbruGAN” trained with Adam optimizer and the learning rate of 0.0002 resulted with these kind of  images.
During this last step EbruGAN transferred features of mixed-styled Ebrus to DCGAN generated silhouettes, which resulted with two fake images, A and B. Fake image A looks similar to Ebru, fake image B is more like mixture of faces. From our opinion, such mixture of faces is not expected to obtain, this is where GANs create its own art. Such unexpected results are the most important distinction of this work, one additional property is achieved for training process. We managed to force GANs to create new using ver small number of input dataset. 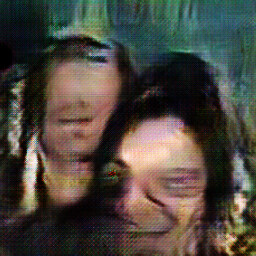 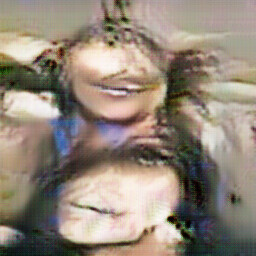 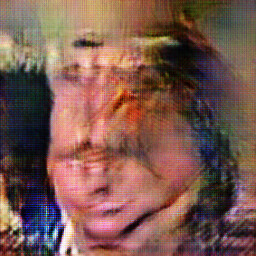